Henry A. Castle was many things to many people; but perhaps chief among them, he was a leader, in every sense of the word. A Columbus, Illinois native, Henry A. Castle was a father, soldier, journalist, politician, entrepreneur, and a humanitarian. He possessed an uncanny ability to be everything to everyone, and was forever a servant to his community; ceaseless in his efforts to innovate and progress. It was his eternal hunger for opportunity and his vision for a vibrant and promising future which helped shape the indelible legacy of North St. Paul – an extraordinary small town in a big city.

Castle settled in St. Paul in 1868 with his family at the age of 27. For a young man in his twenties, Castle was well beyond his years and quickly became a figure of great significance. 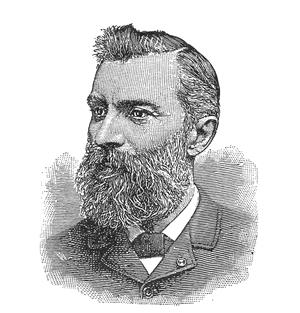 It was not long before he was well-known in the professions of journalism, politics and business in the Midwest. A jack of all trades, Henry Castle was an ambitious and spirited individual with an eye for opportunity and the drive to seize it. Though there were many individuals who contributed to the emergence of North St. Paul as a thriving and growing community outside the cities, Henry Castle is considered to be the man with the vision and the determination to make that vision a reality. It began in 1872 when Castle began purchasing land near Silver Lake to be platted for the future community of North St. Paul.

The North St. Paul Historical Society is currently selling a special edition of the 125 Years of Good Living, 25 years chronology 1888-2012.  It contains the information from the first 100 years of the city with an update of the past 25 years in celebration of our 125th year as a city. The cost of the book is $25 and will be on sale during the regular museum hours, Friday 1-4 p.m. and Saturday 10 a.m. - 1 p.m. You may also pick one up at City Hall.
Utilities & PaymentsAccess, view and pay your utility bill easily through your online account.Read More...
Police DepartmentThe North St. Paul Police Department serves and protects your city and community.Read More...
Fire & EMS DepartmentThe North St. Paul Fire & EMS Department works around the clock to keep you safe.Read More...
Garbage & RecyclingLearn more about how you can play your part in keeping our city environmentally friendly.Read More...
Permits & LicensingEnsure your project is completed correctly. Make sure you have the correct permits and licensing in place.Read More...
Parks & RecreationExperience our City. Visit our many parks and outdoor activities.Read More
Government Websites by CivicPlus®
[]